You are most warmly invited to the book launch of 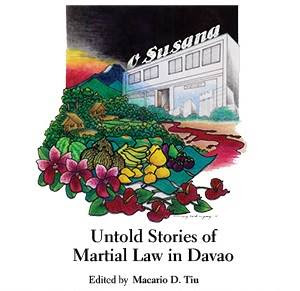 A Letter of Invitation

On January 13, a group of us met in a room near the Tambara office of the Ateneo de Davao University to discuss the details of the launching of our book     O SUSANA! THE UNTOLD STORIES OF MARTIAL LAW IN DAVAO.

There are more than 30 of us writers who were part of this network of human rights activists during the Marcos regime’s martial rule who congregated in a building known as Susana Building. The offices in this building included: the Mindanao-Sulu Pastoral Conference Secretariat (where I was Executive Secretary), the Mindanao-Sulu Secretariat of Social Action, the Philippine Business for Social Progress, the Foundation of the Banana Planters, Inc., the Mindanao-Sulu Conference for Justice and Development, the Citizens' Council for Justice and Peace and AFRIM.

The building was constantly under the surveillance of the agents of Marcos' authoritarian rule and in fact there were a few raids that took place in that location.  A few of us eventually got arrested, or spent time in prison. A portion of this building, i.e. the MISSSA-MSPCS offices, was burned or caught fire, a mystery to us until now. However, we continued to sustain our commitment long after martial rule ended.

In the years that followed, reunions among those in this network of friends continued to take place as we continued to interact given our sustained commitment to justice, peace and the integrity of creation.  Most remained actively engaged in various social and ecological advocacies based in Davao City.

Two years ago, during this reunion, the idea arose that we should come up with an ANTHOLOGY recalling those years so that the present and future generations have an idea how oppressive martial rule was, and to share our reflections on how those times have greatly influenced what we have become.  This has taken on a greater importance with the current attempt to deodorize the Marcos dictatorship, as you very well know.

In the last two years, the articles got written and compiled.  And eventually we were able to get Dr. Macario Tiu into this project not only for him to serve as main editor; he even graciously offered to ask AdDU to be the book's publisher.

We are hoping you are free on this date and time as we would like to invite you to attend our book launch.

Your presence would be a source of inspiration for all specially those who share our perspective on human rights and civil liberties.

We are hoping that Fr. Joel Tabora, President of AdDU and Archbishop Romulo Valles DD will also be present to do the Closing Prayer and Final Blessing.

We highly anticipate your presence to help us celebrate the birth of this much-awaited book.