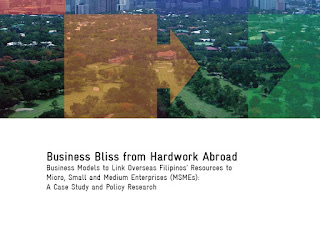 MANILA, Philippines—FOR a country that enjoys billion-dollar overseas remittances from compatriots abroad, one might think that the Philippines has already capitalized on these monies’ entrepreneurial potential.

But a recently-released study by the bilateral German International Development Cooperation (GIZ) office here has found that the world’s fourth biggest recipient of overseas remittances has yet to have a strategy to direct the resources of Filipinos abroad into developing the micro, small and medium enterprise (MSME) sector.

“Apparently, there is no overarching approach to overseas Filipino entrepreneurship —and that is stalling the harnessing of the phenomenon’s many economic and entrepreneurial possibilities,” initial findings of a study by GIZ Philippines’ Private Sector Promotion Programme (SMEDSEP) wrote.

So the situation thus leaves overseas Filipinos and their families moving on their own when it comes to setting up MSMEs and surviving the tough grind of doing business in the Philippines, GIZ SMEDSEP’s study titled Business Bliss from Hardwork Abroad added.

Now with over 9.4 million Filipinos scattered in 220 countries and territories, the Philippines has received over-US$180 billion in remittances from 1975 to 2011 —the resource being the country’s major source of foreign exchange.

Yet there is also “an apparent disconnect between the Philippine business environment and the dynamics of migrant entrepreneurship,” GIZ SMEDSEP’s study further wrote.

This is not to mention that Filipino entrepreneurs, whether overseas migrants or not, continue to operate in a country that is ranked low in global surveys on competitiveness, and on the ease of doing business and investments.

The Philippines’ Department of Trade and Industry (DTI) is hoping to craft a migration-and-MSME development plan that can bring together government agencies within and outside the overseas Filipinos sector and the entrepreneurship community.

During GIZ’s presentation, Ms. Rhodora Leaño of DTI’s Bureau of MSME Development (BMSMED) admitted the DTI has yet to specifically look at the entrepreneurial needs of overseas Filipinos and their families given that the agency caters to the general Filipino population.

Overseas Filipinos were included as a thematic area in the 2011-2016 MSME Development Plan of DTI. GIZ, in a 2010 paper, tagged the Philippines’ overseas migration phenomenon as a “competitive advantage” for MSME development.

But while not all Filipinos here and abroad are entrepreneurial, economist Alvin Ang of the University of Santo Tomas said that such proposed development plan must give “sustainable options” to those overseas Filipinos who are entrepreneurial, as well as those who are risk-averse and may want to park their money in investment instruments.

Overseas Filipino entrepreneurs, GIZ SMEDSEP’s study found out, can engage in business —with or without the help of their family members back home— either when they are currently abroad on a temporary basis (including seafarers), when they are already permanently settling overseas, when they return for good to the country, and when they travel back and forth from their host country to the Philippines.

The absence of inputs from the overseas migration phenomenon in other countries’ strategic plans for MSME development may be a prevailing occurrence, says the nonprofit Institute for Migration and Development Issues (IMDI).

The study can be downloaded here:

Sponsored the printing and dissemination of this policy brief
Posted by Wimler at 3:22 AM No comments: