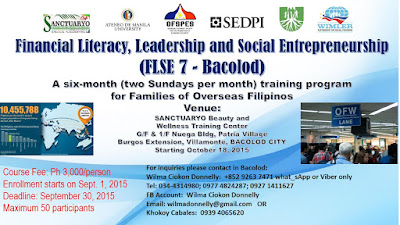 The FLSE program is a joint initiative of Migration and Development Consortium composed of the Ateneo School of Government (ASoG), Overseas Filipinos Society for the Promotion of Economic Security (OPSPES), Social Enterprises Development Partnership, Inc. (SEDPI), and Ugat Foundation in cooperation WIMLER Foundation Philippines. Sanctuaryo is the main organizer and host of the FLSE in Bacolod City.

The Leadership and Social Entrepreneurship (LSE) program was first conducted in Rome, Italy in 2008 and has since reached out to other overseas Filipinos (OFs) in Naples, Milan, Florence, Turin, Dubai, Amsterdam, Paris and Brussels.  By April 2013, over 700 had graduated from 21 batches.  LSE22 in Hong Kong, which started on March 9, 2013 follows the successful holding of LSE 12, 15 and 16.  Also launched in October 2012 was the first FLSE program designed for the families of OFs in the Baclaran area, followed by Davao City, Iloilo City (FLSE-3 Batch-1) and Cagayan de Oro City.

The objective of FLSE is similar to LSE but the emphasis is on the experience of the families left behind.  FLSE helps OFW families to acquire skills and knowledge to help their relatives working abroad to achieve their migration goals and prepare for their return and reintegration.  It also develops and enhances their leadership skills to become active participants in the community and nation-building.

FLSE covers 13 sessions each, two (2) Sundays per month, over a six-month period.  Sessions last from 9:30AM to 4:30PM.  The program covers three (3) modules: financial literacy, leadership and social entrepreneurship.  FLSE aims to develop the leadership skills and potentials among overseas Filipinos and their families, provide knowledge and skills in savings and investments and other financial matters and develop and/or enhance their entrepreneurial skills.

At the end of the course, a certificate is awarded at a graduation ceremony by the ASoG and other partners to trainees who attend all the sessions.

SEPTEMBER 30, 2015 is the deadline for registration.

Admission to the course is on “first come, first served basis” and those who have paid full or partial payment before September 30, 2015.

Inquiries on the program and submission of application forms should be directed to: